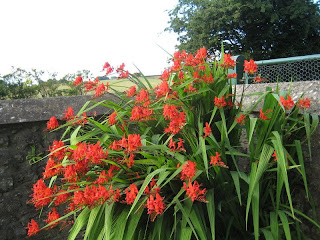 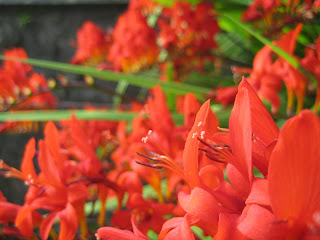 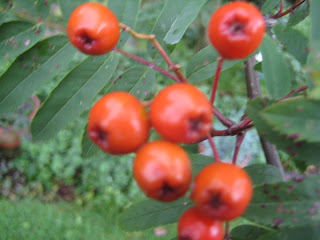 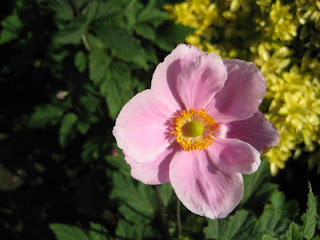 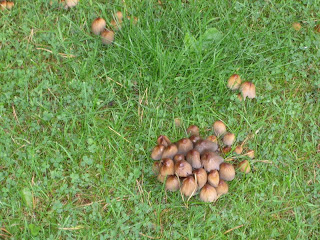 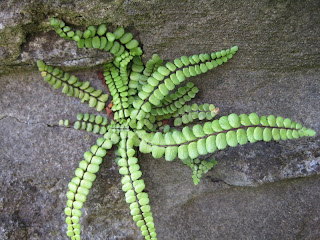 Well yes - I have said it before, and I'll say it again - once the First day of August pops up on the calendar here in The Yorkshire Dales, there is a whiff of Autumn in the air. A lot of our little birds have gone to ground (or should I say hedge) in moult, preparing their plumage for withstanding the coming Winter. There is a faint mist on the fields in the early morning, and a damp nip in the air. Any day now the gossamer in the grass that inspired my blog name, will appear.
But nowhere is the coming of Autumn more evident than in our flora. Overnight, under the Scots Pines, a rash of fungus has shot up. Pale yellow for one day, then a golden brown for a couple of days and then suddenly nothing left but a dark brown "mush". Would that we could have a rash of field mushrooms in the meadow too. We used to get one or two every day to put with the breakfast bacon, but over the last few years there has been none.
The rowan tree by the kitchen window (yes - the bundle tree too) is now sporting orange berries - already being gobbled up by the blackbirds before we have a chance to admire their beauty.Tiny, pretty little ferns are sprouting in the dampness of the front garden wall. Lucifer is flowering in all his glory. He pops his head above the parapet for all to see as they go down the lane. Close up his redness is almost too strong to bear. And the sneaky Japanese Anemones come into bloom. Every year we try to eradicate them from the garden because they take over, but as they have their roots cleverly under the garden path, we never manage to pull them all up. Secretly we are rather pleased about this, because in small doses they are lovely.
On the hay-making front there is no progress. The farmer has so much hay to make for various people in the village - people who have a couple of horses and perhaps one or two fields and who need Winter fodder. To make hay we need four consecutive fine, dry, preferably breezy days. This week we have had some rain every day; some sunshine too but the fields are permanently damp. People are beginning to panic and ask whether they should silage instead. The only person not panicking is the farmer, who has seen it all before and keeps saying, "It'll be alright in a day or two!"
Building work progresses. There has been a short delay while the builder went off to Lytham St Annes for the Golf - but he will be back tomorrow and this week should see a great surge forward (fingers crossed.)
Whatever you are doing this week end - enjoy it.
A little PS' I have learned (tutored by Dominic Rivron - thanks Dom) to do links to my site - did one to Seth yesterday and shall try practising them all next week - as they say "practice makes perfect!" - thanks also to Mrs Nesbitt's Place for her McLinky suggestion.
Posted by The Weaver of Grass at 00:45

August is a beautiful month. Let's hope for some dry weather soon.

Hmm, If we get to the UK at the beginning of October, I still want mellow fruitfulness!

Beautiful photos on this post Weaver, but I'm not nearly ready for autumn yet even if Mother Nature is - I'm still hoping for a bit of summer first! Hope the building work will proceed smoothly and you will soon see the benefits of all that upheaval. I also hope the farmer gets his hay in - forecasts say this month should be better but I'm sure he already knows that.

Love those photos, my favourite is the ferns, we have lots of native ones here all growing around the garden.

Please don't say autumn yet.
August is summer holidays and bucket and spades.
Your photos, however, are glorious.

Your description of what is happening in your world is lovely. Makes me want to drop in for a visit. Great photographs make the ambiance palpable. I, too, love the little fern. Thanks for another peek into your world.

How quickly the seasons turn. I can hardly wait for autumn here, fires in the hearth in the evenings and planting bulbs by day. Your photo of the tenacious fern is inspiring!

a lovely mellow ripe post weaver. i noticed on a walk a couple of days ago that the rownaberries have all of a sudden appeared around her. the days are noticeably shortening as well. the sun is pretty much gone by 9:15. however, there's still a while of summer yet to go and i'm gripping it with my heart's fingers!! autumn is my favourite time of year but it can arrive when it's supposed to and no sooner!!! have a lovely day. steven

We're still firmly in summer over here, with +25-30 every day, but nights cool enough for a good sleep. Soon the chrysanthamums will be in the garden centres and I'll buy a few, secrety thinking that it's too early, but loving them nonetheless.
Beautiful reds in your photos.

yes signs of autumn here too, there's been so much rain here that we've had good fungi displays already for over a month....

Well Weaver I sincerely hope that we'll have a bit of summer in the coming months. Yesterday was dry, today it has been raining untill a few hours ago, then the sun came through the clouds. Your flowers are beautiful! Thanks for sharing!

You can smell the turn, at least in the north, and it definitely happens around the first of August. The asters are open on the roadside and you need a blanket at night. We defintely have the mists Jinksy referred to. A lovely post, and thanks for the photographs.

Keat's Autumn poem is one of my favorites. Our weather here is so dry we don't get "Seasons of Mist," so I enjoy your wonderful description of your home and fruitful gardens. I'm sure the bees are busy filling their combs to overflowing, "they think warm days will never cease." Great photos, great post.

Oh no Weaver, not yet please! I think your Autumn has arrived a bit before ours. I have noticed the nights drawing in though but like some of your readers, hope for some summer weather first! Lovely photos. I'm sure the hay will be brought in soon.

I've just been mowing the lawns (again!!) and noticed a slight autumny feeling in the air. Not a nip, not any visible change, just a kind of prelude of almost wistfulness. Lovely, exhilarating - but only a little foretaste, because I too am looking forward to many more summer days still!

Send us your rain. We have no hint of autumn. Farmers are not getting a second cutting of hay where sometimes three is taken. Thanks for sharing your beauty.

Jinksy - me too.
Helen - we are sure due for some!
Penny - my birthday is at the end of October and it is usually the best time to see autumn leaves.
Heather - Thanks. Apparently we might get a couple of dry days this week, so he is watching carefully.
Amy - yes, those little ferns are sweet, aren't they.

Elizabeth - Buckets and spades - ah! those were the days.
Bonnie - thank you for your comments.
Golden West - fires in the hearth sounds good - we will be able to try out our new wood burning stove - being fitted today!
Steven - the trouble with autumn is that it is followed by winter.
Pondside - I too love the colours of chrysanthemums - and I can almost smell them - it is one of the smells of autumn for me.
Juliet - I love fungi and keep meaning to photograph more of them.

Reader wil - thank you for the comment - I too am hoping for a bit of summer sunshine.
Mairi - asters on the road-side - how wonderful. Thanks for visiting, shall pop over and see you in a few minutes.
Leenie - lots of honey to come then.
BT we are keeping our fingers crossed re the hay - but another few weeks like this and it will have to be silage instead.
Raph - when are we going to get a drawing of you mowing the lawn (again!)

Jobhunter - I take it that it is too dry for the grass to grow. Oh dear, we all have our problems don't we?

As usual - thank you to everyone for their interesting comments - they enable us to have a two-way chat and I really enjoy that.

What??? Sniff of Autumn??? Move over Weaver, I'm a coming! Any place that has so short a summer is for me. Do you rent rooms on a semi permanent basis??? Here we are in the depths of winter, a balmy 22oC, summer lasts... well... forever!!! or at least seems to and is very hot and humid here. Your short and balmy summer (well at least that's how it seems to me) sounds idyllic! Might have to start sewing a bunch of hot water bottles together to form some sort of heated wet suit for the winter though. Perhaps one with central heating built in...

Last post for me to catch up, Weaver! We had lots of the crocosmia (or Montbretia) in our previous garden but it was of the (seemingly more common) orange variety. I really like the deep red.

I'm glad to hear how your blog name came about; often wondered!

The rain doesn't seem to have held off yet!