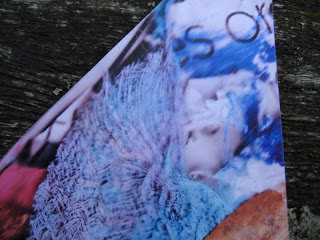 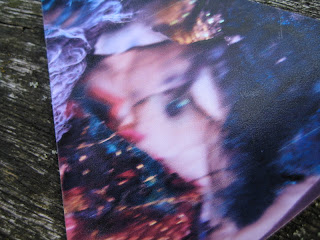 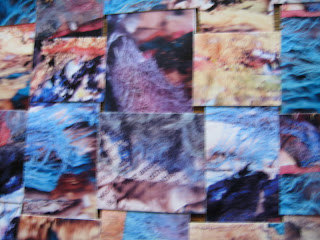 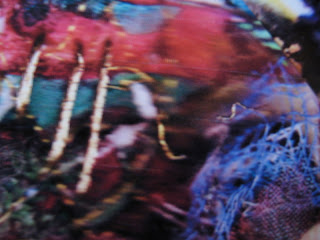 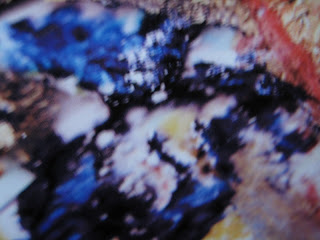 I am totally unable to let Seth's bundle idea become blog-history. I think all of us who participated enjoyed it so much and the resultant "works of art" were such fun to do and so interesting to look at - that it seemed a shame to just put it all away.

So I had a go at disintegrating my bundle art - by scanning it and then cutting it into pieces and reassembling it. I found one or two little pieces which, when photographed by themselves, were most interesting. Some pieces reminded me of pictures from space.
And there were two really interesting bits - the photographs are above. Now come on, dear readers, you know that we have the builders in and that the situation here is not one of complete and silent harmony at present - so stretch your imagination. In one of the photographs I can see a fragment which looks like a bit of a Victorian china doll's face (mainly one bright blue eye and very red lips) and in another photograph I can see a tiny pale pig's nose and eyes (Miss Piggy maybe, if you can really stretch your imagination that far!) I can see neither image when I look at the piece as a whole.
My son (Dominic Rivron) tells me he has read on another blog that this phenomena is called
Pareidolia - the idea that one can see an image in something else (e.g. the face of Jesus in a piece of toast is one photo which comes up if you Google the word).
Well, you may scoff - but I am pretty short of time today and it struck me as a good blog for a harrassed housewife/farmers' wife/builder's mate/ chief tea and coffee maker and phone answerer - not to say dog walker (have you ever tried NOT walking the dog because you are too busy? Two eyes boring into you the whole time takes some resisting!) So - look at the photos - do at least try to see the two faces - and I'll see you tomorrow.
Posted by The Weaver of Grass at 06:35

Yes I see 1 face! This does look an arty typy thingy...love anything like that!

You do manage to keep yourself pretty busy!
Most interesting effects with the bundle.
Buster always wants to go out whenever I am about to put food on the table........

I like to tease my sister about her seeing faces in everything. I tell her she's too stressed! teehee Even though I see them in everything, too. My bedroom door, when I was five, had a large woodgrain pattern that contained the face of a hideous monster.

I hope you may spare a thought for the Tennyson anniversary... I know he is one of your poetic GREATS.

I can see the little piggy alright, now i wonder why that might be ,? Mmmm.

Definitely see the doll face and the pig! My head spins with the thoughts of all the jobs you are in the middle of right now! Good for you for taking time for some art play!

I must be in unreceptive mode today and tried really hard to see a face, but without success. Sorry. I can see the words now, written in red ink on my exercise book all those years ago: Must try harder!

Oh yes, the nice clean pig (compared to the ones down the road) and the doll's face, - and have you found the tortoise's head stretched out from his neck?

Oh my goodness me, what have I started? A red bug - a long-necked tortoise? Yes - I can see them both - now tonight I shall be staring at the curtains looking for that monster I sometimes see if I look at the right piece of the pattern. It is obvious that all of you have been staring intently at my photographs. Poor old TFE - recovering (albeit slowly) from swine flu must have jumped at the sight of the pig - they are not on his list of "must-haves" at present. Thanks to everyone. First building post tomorrow for you to see.

Laughed about your dog! I have a lovely border terrier too & I know exactly what you mean! I love cloud watching - it's amazing what you can see up there.

Your imagination is stirred by thoughts of the Pacific Ocean, while mine is set dancing by places such as Cornwall, the White Cliffs of Dover, the Isle of Man... And historical dramas from the BBC and A&E. Just saw the most current version of "Wuthering Heights" - the best yet! Also a big fan of the costume dramas made from Catherine Cookson's novels.

Hmmm, another one here guilty of an over-active imagination - although rather than a china doll face I see an exotic princess with a black scarf covering half her face...

The bundle entities are looking out at us in friendship. Glad you weren't too busy to craft this post for us, Weaver

Yes, I see all the things but I think Miss Piggy is too glamorous to be your little pig! Glad you're managing to take you mind off the building work! Look forward to seeing those pics.

great......I seem to seee faces in everything also

In the last photo I see an alien with a star for a belly button!

I have just re-hung my bundle Weaver, it must be catching!! I re-wrapped all the left over bits plus a few extras. Here we go again, we're hooked! I can see faces, go you!