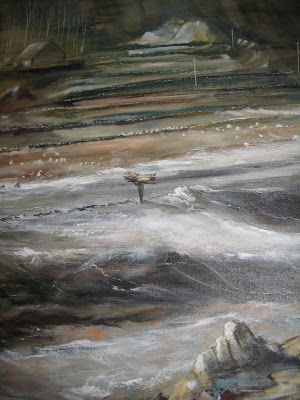 In 1984 my then husband (d.1991) and I visited China, staying for a week in Beijing and then travelling into Mongolia by train for the second week.My memories of Beijing are really limited to places of tourist interest, the millions of bicycles and hardly any cars on the roads (yes - this has changed now), Tienanmen square, kites, dragons, and a very plastic Chairman Mao (who had been one of my heroes). I am sure the reason for my memories being so few is that the train journey was so mind-blowing that it took over.
We travelled "tourist class" (in those days we had no option), which meant white linen covers on the seats and a charming Chinese lady circulating constantly with a pot of freshly-made lemon tea. The train went quite slowly, the atmosphere was serene and I, for one, spent the whole journey with my nose pressed to the window, looking out. I did not want to miss one single second of that journey. (would you believe that some people slept for the first six hours or so!)
I have many "snapshot" memories of that journey:
Looking into rural backyards where children and little black pigs would be running around, and where the women would be shaking and hanging out bedding.
Maize cobs lying on the roofs of houses.
Getting a brief glimpse into a village square and seeing a donkey walking round and round, working a mill wheel grinding corn, while the village women stood around, chatting.
Acres of paddy fields of brown soil, separated by narrow, tree-lined roads full of cycling workers.
Tall, steep mountains with trees growing all along the topmost ridges - just like you see in Chinese paintings.
A man walking home through the countryside with a whole side of what looked like deer carried over his shoulder.
Mile after mile of brown and white countryside, the rivers frozen and the fields bare (it was mid-January).
Deep lakes frozen with ice a metre thick and lotus leaves suspended in the ice.

But there was one memory I carried with me that is still as fresh as the day I saw it. That is the memory of the man in the painting at the beginning of this post. The rivers were frozen solid, the train was stationary, and as I watched this man walked along the river bed, then turned towards the village in the distance, carrying a large bundle of twigs on his shoulders. There was beauty, there was serenity, there was the epitome of rural life in China at that time. It was like looking into a time bubble - it was as though the image stood still; I have it in my head today, just as I always have it in my head when China is mentioned.
And I wonder. Who was her? Was he a young man, or an old man? Was he carrying fuel to warm his family and provide heat for cooking? Where is he now? The questions could go on and on.
When we returned, because the image had made such a profound impression on me, my husband did this oil painting. It hangs on my staircase and I pass it many times a day. I love the painting as much today as I did when he first gave it to me. It makes me think too - that man - just a simple man, carrying a simple bundle of twigs - has no idea of my existence, has no idea that he is, for me, my over-riding image of rural life in China.
I hope you enjoy looking at the picture as much as I do.
## Man carrying twigs. Painted by Malcolm Rivron (1924 - 1991)
Posted by The Weaver of Grass at 05:38

What lovely memories Weaver, and what a beautiful painting - no wonder you love it. It might be a mistake to return to China now and find it changed beyond recognition, although hopefully life has improved for some of her people.

Beautiful painting and post - how lucky to have all those snapshot memories inside your mind. x

It's a beautiful painting with wonderful memories.

Thank you for sharing your journey with us.

Wonderfully told, I know why you love that picture and the memories. Thanks , for sharing that with all of us.
Hugs~~~Leslie

I love the picture.Thank you for sharing it.
I studied Chinese history at college as history was my main subject.
I bet you had the most fantastic trip.

Weaver, I enjoyed this, and previous posts so much! My mother in law travelled by train to Mongolia also. It was a trip that fascinated me, just listening.So glad you had a wonderful time with your dear husband and can remember him this way.How thoughtful of him to do the painting.xx

China is on my "bucket list" - things to do and places to see before I kick the bucket. Also on my bucket list is Africa, Egypt, Europe and Greece. Yes, I know my list is quite extensive, but China is at the top. Lucky girl to have those wonderful travel memories, Weaver. The painting is exquisite! Thanks much for sharing.

A serenely beautiful painting, and captivating memories, so nicely told.
Thank you Weaver...

What a beautiful painting and story Weaver. I was lucky enough to tag along on a study tour my husband was escorting for people in the sugar industry and we visited out of the way places in China, I was fascinated by the cooking on the trains,also the way every square inch of hillside was farmed. You revived some lovely memories for me. Cheers, Robin

I've never been to China, but still, I've been there.

And yes, a beautiful painting.

Oh my dear, this speaks all else above of your great love....
We were in China in 2003, things on the train had changed somewhat.
Instead of tourist class, there was 'soft seat', but on the way from Beijing to Xi'an it was all in together in a 4 berth compartment with a thermos of hot water provided but no food available. From Beijing to Hong Kong a otally different story with a luxurious two berth compartment and silk flowers on the table.
The train was fast and it was hard to get any decent photos, but I too have memories of rural life there.
Your precious painting is so beautiful as is the sentiment that goes with it.
Thank you for sharing your beautiful memories.

ohhh you have a way of telling a story that goes directly to the heart... such meaning and memories are Treasures. and that man will never know.. I think of things like this too.. glad to know I am not alone..

Yes - Heather I agree about not going back - never a good idea. My new husband enjoys travelling but mainly to the States and Canada - so I go the other way now.

Thanks to everyone - glad you liked the painting.