A Loss to the English Countryside. 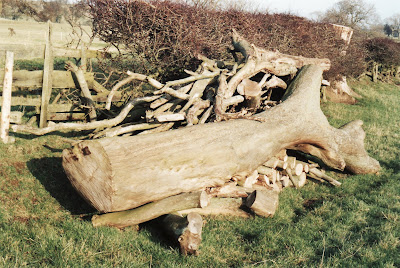 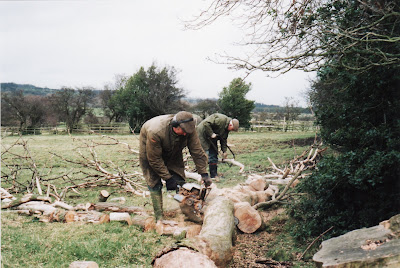 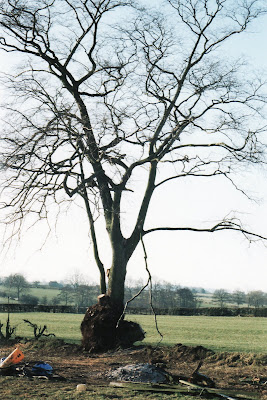 The English Elm tree, along with the yew, was in times past the mainstay of the English country churchyard. Thomas Gray epitomises this in his elegy:
"Beneath those rugged elms, the yew tree's shade
Where heaves the turf in many a mouldering heap
Each in his narrow cell for ever laid,
The rude forefathers of the hamlet sleep.
There were plenty of elms in the hedges and lanes around here - our lane had many and they were dotted about in our field margins. Go further afield and many stately homes had stands of statuesque old elms - it was the quintessential tree of the English countryside.
Robert Browning in self-exile in Italy, longed for the English countryside each Spring - wanting to see the humble buttercup rather than the "gaudy melon flower" and remembering the trees coming into leaf. In his "Home Thoughts from Abroad," he says
"Whoever wakes in England finds,
some morning, unaware,
that the lower boughs of the brushwood sheaf
round the elm tree bole are in tiny leaf."
That brushwood around the base of the trunk was our way of identifying an elm tree when we were children and the first tiny green leaves of Spring would sprout first on this brushwood because it would be in a sheltered position.
Now they are mostly gone from our countryside. 120feet of majestic tree falling victim to the Dutch Elm beetle and slowly dying. I had three elm trees in my garden when I lived in The Midlands and, knowing the disease was about, we watched them carefully. The odd leaf fell early and we worried. The next Spring barely any leaves sprouted and within a month they had fallen - the trees died before our eyes and the effect was catastrophic as it spread around the country.
The disease, first described in The Netherlands, hence the name, was in this country in the 1930's but then in the 1970's a more virulent form arrived - this time probably from Canada - and there was no escape. Everywhere you looked, these giant trees were dying.
The elms on the farm succumbed in the late 1980's. The pictures, taken at the time by me, although I was not married to the farmer then, show dead elm trees. David and his father felled the trees, sawed them up into logs and stored them on our wood pile.
Well, now we are just burning the last of those elm logs. They have been supplemented by holly, hawthorn, sycamore and alder as and when Nature decided to do a bit of pruning. But now the last few logs lie on the hearth ready for burning.
One dead wych elm still stands in the hedge waiting to be felled. Its days are numbered, for we are running short of logs and Winter is not yet over.
Posted by The Weaver of Grass at 07:39

At least trees have a use right to the end of their existence.

I heard that the area round Brighton remained free of the diseas. I don't know whether this is true or not.

sad to see the old trees go... specially when it is in such numbers overall...

We have also lost so many of our magnificent elms. One day, they will probably be little more than historical oddities, a word in a poem or a brief note in some botanical text, with perhaps a few remnant examples still struggling. Our chestnuts are gone, the elms are going, the pines have a deadly beetle wreaking havoc, and the ash trees their own insect executioner. In the Great Smokies pollution has taken most of the Frasier firs. Moreover, you don't see nearly so many big beeches around.

But burn your fallen elm. Enjoys the heat and flames. And consider it both funeral pyre and warm farewell.

My hometown had lovely, towering elm trees, but we lost them all to Dutch Elm Disease in the early 1960's.

Sad indeed.
We watched a lovely old copper beech die slowly from the middle outwards in our garden on Long Island.
Miserab;e.

I'm always sad when trees are felled - I feel a bit like Obelix's dog Dogmatix who howls when this happens!

I think I pressed the wrong button when commenting yesterday about your lovely orange beacon of a willow tree - my arms are tired as I've been doing some vast painting!

Talk of elms always reminds me of Finnegans Wake:
"Can't hear with the waters of. The chittering waters of. Flittering bats, fieldmice bawk talk. Ho! Are you not gone ahome? What Thom Malone? Can't hear with bawk of bats, all thim liffeying waters of. Ho, talk save us! My foos won't moos. I feel as old as yonder elm. A tale told of Shaun or Shem? All Livia's daughtersons. Dark hawks hear us. Night! Night! My ho head halls. I feel as heavy as yonder stone. Tell me of John or Shaun? Who were Shem and Shaun the living sons or daughters of? Night now! Tell me, tell me, tell me, elm! Night night! Telmetale of stem or stone. Beside the rivering waters of, hitherandthithering waters of. Night!"

Amazing to think that the trees could supply you with logs for so long, Weaver.

I'm afraid I've never been very good at recognising trees except, perhaps, an oak or sycamore, but I love to see old ones, huge and spreading.

Yes Jinksy - there is something nice about burning home grown wood.

EB - very interesting. I have friends who used to live in Brighton so I shall investigate that further.

I love that last paragraph Scribe - so fitting. It is sad that so many of our trees are going - they are after all the largest living things on earth.

Sad Greg - maybe worse as they were in a town and therefore more noticeable. You obviously had the disease over there before it came here in its virulent form.

Copper beech is one of my favourite trees Elizabeth - that would be sad - you feel so helpless as it dies slowly before your eyes.

Raph - vast painting? Are we talking work of art here or walls?
I would have thought that giraffes would have a distinct advantage when painting walls - they would not need a tiresome ladder.

Thank you for that excerpt Dominic!

Derrick - there is always a lot of fallen wood on our farm, so it has been well-supplemented. Because this has been an especially cold winter we have got to the bottom of the wood pile, where the old elm logs have lain for a long time.

It is sad to see an old tree rot before your eyes - and sadder still to see a young tree cut down in its prime as is so often done here. A sweet and poignant post Weaver.

Such a tragic loss to our countryside. It seems strange that nothing could be done to halt the disease.

And generations rise that never knew the majesty of the elm...

I hate to see any tree die, probably more than an animal, and we heat with wood (and eat hamburgers!)

Dutch elm disease has taken elms out of the American landscape, as one of your commenters mentioned. In New Mexico a couple of seasons back pine bark beetle killed the pinons that had given the area its unique smell, one I remember from childhood. Now I watch the live oak beside our chimney to see if it will put out new leaves. We have live oak wilt in Texas and it is a devastation. But what's ailing this middle aged tree is human interference. My interference. The guilt is horrible. I'll blog about it soon.

I'm sorry for the loss you write about.