The Journey from Leyburn to Ripon (3) 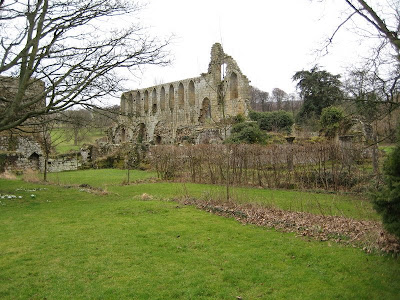 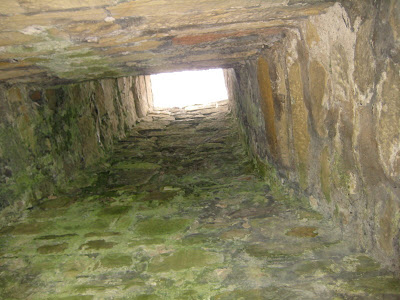 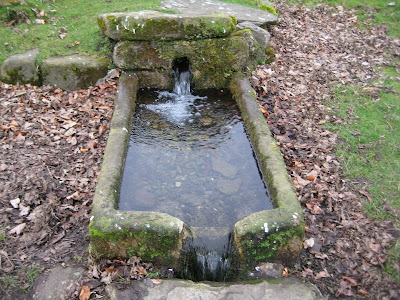 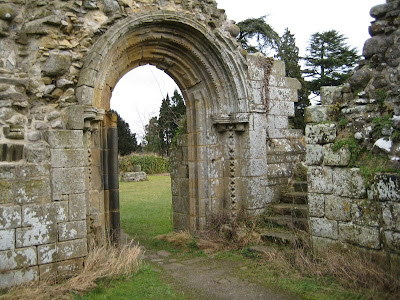 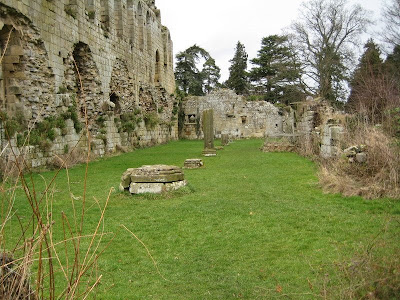 Older posts: 1. Where rivers meet
2. Middleham castle.
Jervaulx Abbey.
Eight miles into the journey from Leyburn to Ripon, Jervaulx Abbey stands almost on the side of the road. It is one of my favourite abbeys (there a lots of them in Yorkshire), because it is privately owned and very unspoilt. It lies in Jervaulx parkland, so the whole setting is very pretty.
You park opposite the entrance and then walk down the footpath, through the park to the gate into the abbey itself, where there is an honesty box. I understand that many of the visitors ignore this and visit without paying but this is a shame because it is well kept and in Summer there are beautiful flowers in a garden setting as well as fairy foxgloves and wallflowers growing in the crevices between the stones. But today, when we visited, there were only snowdrops - and plenty of them.
On the side of the footpath to the Abbey there is an ancient water trough with water constantly running through it. This water goes underground and emerges in the abbey itself and was their source of water.
The Cistercian monks first came here in 1156 after leaving their abbey higher up Wensleydale.
In those days this was serious sheep country and the monks had huge flocks of sheep on land all over the dale. so there was a tradition of riches here.
In the late Middle Ages three huge fireplaces were added to what was the meat kitchen. One of the photographs above is taken standing in the fireplace and looking up the chimney. I can't help wondering whether their "meat" was mutton from their hugs flocks all round the area.
Because it is not overly advertised and is only small, it is a place of peace and tranquility - and long may it remain so.

It does look the most beautiful, peaceful place.
Hope you have a lovely weekend!
;-)

What a soft and lovely place to amble about in ancient silence—so green, and yet so charged with time and the presence of those who walked before.

I envy you such places, Weaver. I really do…

What a very beautiful place and such wonderful architecture - I love medieval archways.

How nice that it is so well kept for others to enjoy. It's so green green there. Sigh.

The chimney shot looks like a painting in its own right....

How beautiful! I love visiting places like that, to enjoy the sense of history and time.

Ugh, I can only imagine spending time walking through and touching those stones. Who could deny the honesty box? Really? Do they not notice how lucky they are?

This was an abbey we visited on my last visit to England, and we loved the peace an tranquility of the area. You can almost breathe the history of the place. I seem to recall that it was late afternoon with the lengthening shadows adding even more atmosphere.

Like you, I love ruined abbeys like this. We are also very fortunate in the Borders to have four such places within easy reach. We also had St Andrews cathedral and castle when we lived there. Magnificent but not quite so peaceful!

Thanks Sal - same to you.

Thanks Scribe for the comment. The thing is you may not have the abbeys, castles etc. but the history is there in your country too. Some years ago we went to Mesa Verde - and we found that beautiful - sadly there was a fire shortly after we were there - but I expect it has all got back to normal again now.

Heather - that archway is my favourite photograph. To the right of it a flight of stairs goes up a little way - one wonders where it went when the abbey was whole.

Yes Cathy - and in summer the gardens are full of lovely flowers.

Tess sends thanks and licks Pat.

Jinksy - I hadn't thought of it like that - but now you say, there is certainly a modern embroidery there somewhere.

Thanks annie. I am still getting messages saying I can't leave a message on your site - but they seem to be getting through.

Woman in a window. I wish I had put a photograph of the honesty box on my blog! The walls leading up to it are built - not of the usual stone round here - of fragments of the abbey which have fallen off - bits of pillars, columns, frescoes etc.

Robin mac - Pity I did not know you then. I live so close that you could have called in for a cup of tea.

Yes Derrick - and what you also have a fortified Manor Houses - I love those. We have two around here - Downholme Manor and Nappa Hall - but i understand there are more in the Borders.

Weaver one thing I do love about where you live is all those amazing ruins. I'm addicted to Time Team. I watch it every Monday nighton the history Channel with my girls. I'm jealous! I think I need an ancient ruin here on my farm to enjoy. So so sorry it's been so long since I've been over. Things have settled now I can get back to enjoying reading your blog each day.

Did you still feel the long ago presence of the monks? It is just the sort of peaceful place where the feelings of long ago would rise up through your feet.

Britain is to be full of beautiful ruins. It makes me wonder what our generations will leave for posterity.

Wow - spectacular photos Weaver! I'd love to be able to ramble through ruins and let the mind wander too - oh the stories those walls could tell...

Is that the abbey that was used in the episode of All Creatures Great and Small? The one where Tristan pretends to be a ghostly monk?