Farming in the snow. 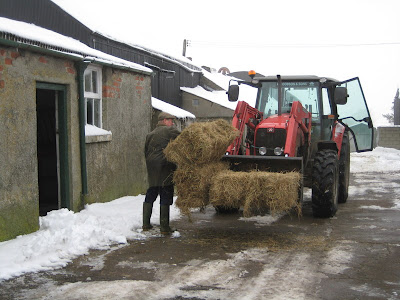 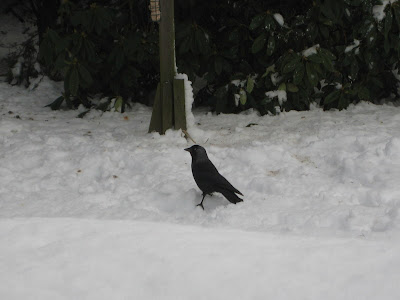 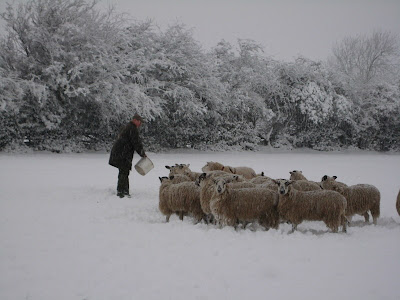 The snow lies a foot deep on the ground here. At last the snow plough has cleared the lane and the farmer has cleared the yard. When the feed merchant came with sheep food on Monday he got as far as the farm gate but couldn't get into the yard, so drastic measures were called for. Now we have a mountain of very dirty-looking snow on the side, but a very clear yard and drive.

The birds are coming to the bird table in droves. At one time this morning we had fourteen blackbirds and eight long-tailed tits. It is on days like this that I wish I had a more sophisticated digital camera!

Amongst the huge selection of birds at the table is the resident jackdaw; he appears to have a damaged wing and for several weeks he couldn't fly at all. Now, in an emergency - like the sudden appearance of farm cats - he can fly up into the lower branches of a Scots pine. So he is improving. I am hoping he will soon be able to soar skywards. He waddles in and eats his breakfast and then comes again mid-afternoon for his tea.

The sheep are a hardy breed and used to roughing it. They scrape with their front feet in the snow to try and get and the green stuff but with twelve inches of snow this is almost impossible. Then they rear up on their hind legs and nibble at the prickly holly leaves. They eat the hay begrudgingly and look with suspicion at the "sheep nuts" which seem to be slightly different from the last lot. They eat them eventually and any they leave is eaten just before dark as the rooks make their way home to Forty Acre wood. Suddenly the field is black with rooks and when they lift off all the surplus nuts have gone.

The farm cats don't venture far in this weather. But they are restless because the snow has forced a pretty long haired grey feral tom cat to come into their hay loft. He is a big lad and our two neutered toms are a bit scared of him. They have abandoned the loft and have taken up residence in two straw lined boxes in the feed hut - nothing like as warm and cosy but safer. They would be welcome in the farm kitchen but will only venture in if I leave the door open as an escape route. Not in this weather.

The cows and heifers sit and chew the cud, their warm breath steaming in the frosty air. Silage to eat whenever they want, warm water to drink, deep straw to lay in - this weather affects them not at all.

And the farmer? Well wrapped up in many layers against the cold he seems unperturbed by the awfulness of these bitter grey days. His fingers and heels have developed frost cracks but even these he accepts as an occupational hazard. When he comes in in the evening to a big log fire he finds it hard to keep awake, so we have got out the jig saw puzzles. Sleeping from 10pm to 6am is better than dropping off at 7pm and then being awake half the night.
Posted by The Weaver of Grass at 07:16

You paint a true winter picture, of I kind I could never imagine. Best to only have to read it, though, than experience it first hand!

Sounds pretty idyllic, was my thought.

I just love reading your posts! And those photographs look like the very definition of winter!

Great post! All the lovely little details that make each scene come alive, renders the land and farm and animals real. There is always something interesting to write about in a daily life lived with an open eye.

oh gosh that makes me shiver, its cold and frosty and icy on Gorgie City Farm but we don't have snow and we don't have your acres either...

I find myself looking back at yesterday's post many times. I love the way you wrote about your friends. It's funny how people flit in and out of our lives. Some make barely a ripple while others are here forever. But everyone I come across - no matter how brief or long - influence me in some way. I love reading your posts, Weaver. I've said this before, but I would dearly love an opportunity to spend the afternoon chatting with you over a pot of tea. You are a woman with profound wisdom and depth. I am so very glad to have stumbled across your blog.

I love the image of the rooks eating the left-over sheep nuts.

What is the sheep food made of? I imagine kind of dried grass biscuits!

We had to feed half-wild cows in thick snow once. It was not fun!

The Grizzled, etc. said what I was going to say, and much better. Truly enjoyed the writing and the pictures, both visual and word.

I am glad to know you have someone to share the cold weather with you. You paint beautiful picture with your words.

Our whole town was without power from Last Tuesday and some still are in the dark. My power has been back on since Friday afternoon but, I spent 4 days in an emergency shelter for people without heat. The sun is shining and it is still 33 degrees. But, it is supposed to start warming up tomorrow. Stay warm. Hugs~~~

Oh, the farmer's poor hands. I don't know if you can find a product called "Hirschtalg" in the UK, but it comes in a green tube like a big toothpaste tube and it's great for rubbing into feet and hands. It's made from deer fat and herbs. It looks like green toothpaste. But don't brush your teeth with it.

All sorts of animals adjusting to the weather. Pretty though, isn't it? (Bet that fire feels good with all that freezing!)

Yikes that looks so cold - the older I get the more I dislike being cold yet winter is such a beautiful season if it's not -30.
I love reading your posts Weaver.

I'm glad for wifi, i can catch up on everyone! I love it when you post pics from around where you live, the towns farm...its just awesome i love seeing diff places! is that a Massey Ferg your farmer is driving???? It looks like ours does!
The snow is so pretty....but 12 inches would probably shut things down around here...we usually dont get a lot of snow, let a lone an ice storm!!!!!!!!!!!! Which is why ky was not prepared, but then again there is nothing you can do in an ice storm to prepare...LOL glad I could stop by and catch up, your blog is lovely as always!

I love your photos. It looks very similar around here although my only animals are cats and chickens - neither liking the snow very much. I never knew a chicken could look miserable until today!

If I had both youth and energy I would love to come and help out on your farm. It seems to be an enviably simple life but I know that there are irritating red tape and bureaucracy to contend with as well as the physical hard work. The pace must be a bit slower than town or city life, and all the joys of nature on the side.

That's because you are u nder fifty Chris!!

Pamela - bleak is the right word to sum up what it is like here - and the yard is a perfect skating rink this morning.

I agree Incorrigible. I have a friend (Gl in my friends post) who has the most wonderful eye for detail. When we walk together she finds feathers (and identifies them), owl pellets (which she disects) pretty stones - all manner of things.

c.g.p. - I think the west has fared much better than we have - I have friends in Windermere and they have no snow at all. There are places only ten miles from here with none. I think it is the height that makes the difference.

Raph - the sheep food we use is made mainly of sugar beet - often you will see sheep just given heaps of mangolds or sugar beet to eat - we also give them hay.

Dragonstar - I wonder how the Chillington herd of wild cows in Northumberland are managing - I expect they will be fed hay from a distance.

Thanks, Poet. Enquired at the chemist but they have never heard of it. I suppose, living on mainland Europe, you have worse winters than us usually and the stuff will have been developed for that climate. Still thanks for suggesting it.

Woman in a window - yes, you are right about the fire - the trouble is it also makes you sleepy and I have a rule that I never let myself go to sleep in the chair!!

Woman in a window - yes, you are right about the fire - the trouble is it also makes you sleepy and I have a rule that I never let myself go to sleep in the chair!!

Thanks Janice. I agree with what you say - when I was young I used to love the stuff - now I am just scared of falling and breaking a bone.

Hi Kyfarmlife - yes - it is still freezing cold and more snow forecast. Still, as you know, farming has to go on. Yes it is a Massey - we also have a Same and a couple of very ancient fergies which the farmers says he will restore someday when he has nothing else to do!

elizabethm - our chickens come out of their house every day, regardless of the weather - but if it is raining they just walk across the yard and go into the tractor shed, where they stand, hunched over, all day doing nothing. Then they look pretty miserable.

Heather - youth and energy - what are those??
Yes, the pace of life ismuch slower, thank goodness. After years of teaching in inner city comprehensive schools you cannot imagine the bliss of the peace and quiet.

That is one of the lovliest posts I have read Weaver. Thank you.