The Farm to Ripon 1. Where rivers meet. 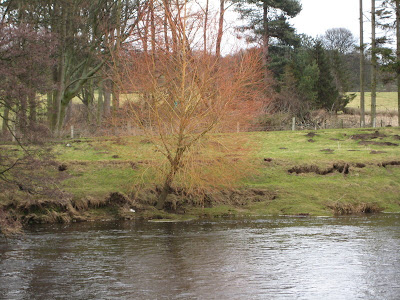 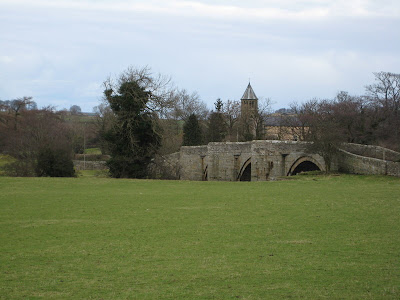 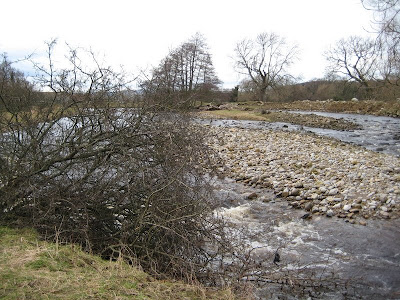 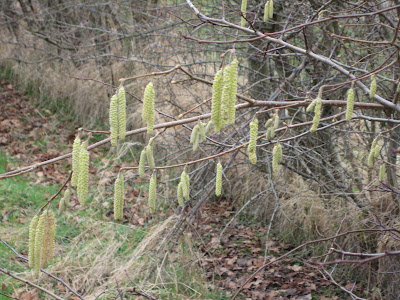 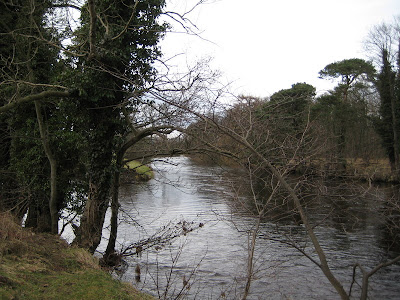 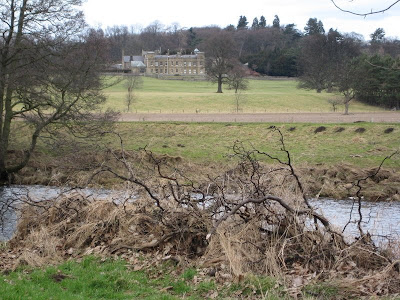 From our farm to the ancient city of Ripon is barely twenty five miles, but the journey passes through lovely scenery and through some interesting places, which I would like to share with you now and then.Today Tess and I went to the nearest place of interest for our afternoon walk. Ulshaw is a tiny settlement, just a couple of houses, a splendid RC church and a seventeenth century bridge. I have posted a picture of this bridge before; here it is again with the very pretty church of S Simon and S Jude in the background.The River Ure rises up at the top end of Wensleydale (used to be called Uredale or Yoredale). By the time it reaches Ulshaw bridge it is quite a wide river and as it drains all of the uplands of Wensleydale, it is subject to flooding and can easily rise twenty feet in an hour if there is heavy rainfall up the dale.Within a stone's throw of where I stood to take the picture of Ulshaw Bridge flows the River Cover. It rises at Cover head at the top end of Coverdale and flows down through some very hilly country to Cover bridge and it is here that the two rivers converge.Tess and I set off along the bank of the Cover. Evidence of flooding is everywhere although the river today is quite benign, if flowing quickly. Great swathes of washed stone lie in the middle of the river Cover, brought downstream from the uplands and now lying in such heaps that they are changing the course of the river - for now. Fallen trees litter the banks where they have been washed up as the water receded.This is Tess's first visit and she is ecstatic. In another six weeks or so the grassy bank will be covered with violets, primroses, wood anemones, cowslips - this is a marvellous place for wild flowers - we even see the odd purple orchid - but today, with Spring still a little way off there are just the red-tinged alder bushes and - joy of joys - the hedgerow is lit all the way along with hazel catkins. Across the river, on the far side, a young willow tree with its feet in the water shines out like an orange beacon.Where the two rivers converge there is a spit of land grazed by sheep belonging to the Coverbridge farmer, Tony. He often has to move them away when there is floodwater coming, but today they graze happily, heavily pregnant and soon to lamb.At the far end of the river walk lies Jervaulx Abbey, now a ruin, but today we are not going that far, so we just walk as far as what used to be the abbey's fishponds but are now the home of swans, coots, moorhens and a few ducks.This land all belongs to the Danby Estate and the Scrope family. The first Lord Scrope fought at the Battle of Crecy. Danby Hall, with its magnificent view of the river, is still lived in by members of the Scrope family today.In the Summer there will be sandmartins. The holes in the bank are there, waiting for their arrival. We saw two goosanders and a swan, we met two spaniels, two retrievers and a Jack Russell terrier (and their owners of course!) but other than that we had the bank to ourselves. The peace and tranquility were profound. We came back happy - me feeling refreshed and renewed - Tess feeling ready to set off rabbitting with the farmer. Bliss.
Photos from the top:
Orange willow on Ure bank.
Ulshaw bridge and church.
Stones washed down by the river Cover.
Hazel catkins in the hedge.
Where the Ure and the Cover meet.
Danby Hall.

Wonderful. I love pictures of the countryside at this time of year: I don't know why but for some reason they seem more old-fashioned. Maybe it's the more muted colours. Combine that with very subtle augurs of spring, and it makes for something that repays attention, and patience, and hopefulness.

Oh, my, oh my! What lovely country you live in, Weaver. So green and pastoral…and ancient. And those rivers—you photos have set this fisherman's heart to racing. What I wouldn't give…

I really like the looks of that red willow. I would love to have one on my riverbank. I wonder if they are available over here?

Please return to this area when all those wildflowers are blooming. I'd love to see them painting the waterside.

Danby Hall looks so magical. What an enchanting spot in the world you have!

Gorgeous. Ache for a day to explore like this.

The most beautiful scenery! I bet it will be lovely in the Spring.Hope you revisit and take more pics!
;-)

thanks for sharing, it looks lovely and oh its so wonderful to see the catkins isn't it?

What a fabulous post Weaver. Our orchard has lots of catkins in at the moment, they are so pretty.

Thanx for your comment on my blog, Pat - i've struggled to keep up with people this last few weeks so it's great to have pix to look at as well as just text! and these pix are great. It's a part of the country i love.

Lovely countryside.
I saw catkins yesterday and lots of snowdrops.

What a lovely and interesting walk you and Tessa had. How nice of you to invite us along. The pictures are lovely and so make your story come alive, just as if I had been there with you. Thanks for sharing.

I so envy you those catkins! Fabulous spring green. Thanks!

I agree EB - there is an old-fashioned air to them.

I agree EB - there is an old-fashioned air to them.

Elizabeth - the first catkins are out on the farm today reports the farmer.

Thanks Scribe. (wish I knew your name) - that orange willow will probably be just the common willow as it is growing in the wild. All our willow trees here show that orange colour on their twigs in early Spring.

Willow and Woman in a window:

I think things always look better in photographs - you don't see the weeds and the debris - but having said that it is still lovely countryside up here.

Thanks to all of your for the comments - we certainly enjoyed our walk and as colder weather is forecast for the weekend - we just went on the right day.

Weaver, did I mention Jim is now doing his own blog. On a botanical theme, as that's his 'thing'. You might like to take a look?

Just on a catch-up exercise! Lovely photos and I'm glad you enjoyed your walk.

I'm just reading a book about the Wars of the Roses and have seen the name Scrope mentioned for a churchman, who I think came to a sticky end! Sorry I can't be clearer just now.

How wonderful to see these signs of spring. I love when you take us through the countryside Weaver.