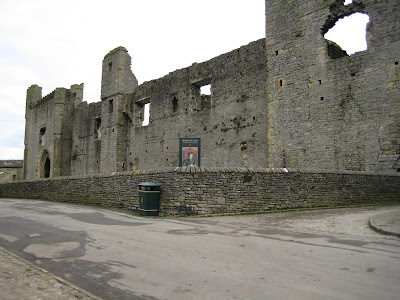 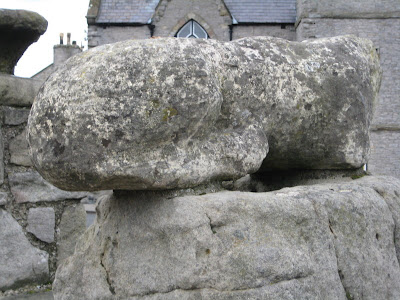 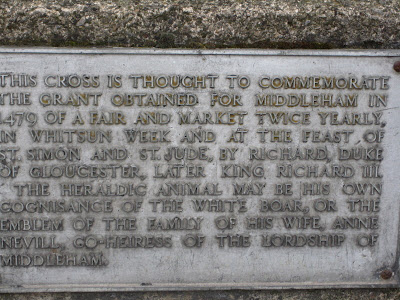 Middleham Castle.
Middleham is a little town very close to our farm. It is now a major centre for horse racing and has many racing stables in the vicinity. But in the past it was an important place and a seat of royalty.
The castle, now a magnificent ruin and managed by English Heritage, was built in the reign of Henry II, a no-nonsense piece of architecture meant to signify strength and purpose - with keep walls twelve feet thick. In the Wars of the Roses both Edward IV and Henry VI were imprisoned there.
It was in the fifteenth century that it really came into its own, when it became the home of Warwick The King-Maker, and it was there that Richard, Duke of Gloucester and then
Richard III, met Anne, Warwick's daughter. Lady Anne Neville became the wife of RichardIII and they made Middleham Castle their home in the North - it was said to be Richard's favourite home.
These were troubled times. They had money, and status, and - it is said - a palatial home, but none of this mattered in the fifteenth century. In 1484 their son, Edward, aged eleven, died there in what has become known as The Prince's Tower; in 1485 Lady Anne Neville also died and of course Richard himself was killed at The Battle of Bosworth Field.
In the English Civil War it was used for a time as a prison but then it began to fall into disrepair and like so many places around the world, its stone was taken by the locals to build their houses. How are the mighty fallen
Across the road from the castle stands an ancient market cross. On its top is a greatly eroded stone animal, which may well be what is left of a boar - which was Richard's emblem. I am putting a photo of the plaque on my blog too - hoping it is clear enough to read.
It is an imposing ruin and in early Summer it is covered with tiny pink flowers in all the crevices. The flower is called The Fairy Foxglove (Erinus Alpinus). This flower is also growing in profusion at various forts along Hadrian's Wall and I like to think that the story is true that it originally came to England from Italy as seed on the boots of the Roman soldiers.
Posted by The Weaver of Grass at 05:47

Surely the Roman soldiers cleaned their boots a few times between Rome and Hadrians wall, when I did National Service we had to bull them every day! I like to think a wife or girlfriend sent them in a loving letter.

We all seem to be thinking about the Romans! You might like to see my posting about a book, Vote for Caesar ..., about whether Roman customs can be applied today. I love Middleham Castle: my family would stay at Masham and come on to visit me in my student hall at Newcastle. I have a coat made from Wensleydale wool from a shop in the Middleham area (might have been Middleham itself? ... our expeditions were many years ago). now!).

Like the varation of 'Little Pig, Little Pig, let me come in' - if that amorphous blob really was once a Little Piggy!

For us over here where castles are a rare few they stir our imaginations with exciting tales and imagery.
There is so much history in your country - it's a treat when you share it with us.

Lots of interesting history - and we're back to the Wars of the Roses again! Although many people wouldn't think of it, there aren't many places in UK, however small, that can't lay claim to historic events/characters!

I have missed reading your blog and am so delighted once again to have a bit of time to do some armchair traveling. What a beautiful place you live in.

I say ditto to what Janice Thomson said.

Did they have postmen in those days, Mike? There are always niggly little seams and places where teeny seeds could hide. Don't spoil my little dream!!

Caroline - we now live next door to a Wensleydale sheep shop (about a mile down our lane). When they have lambs I fully intend to post a blog about them. I agree with you about the wool - it is soft, silky and very warm.

Glad you enjoyed it Janice - I think we are so surrounded by history that we tend to almost ignore it. But I am sure there is history everywhere - just not in those great "macho" castles men had to build to advertise their own importance.

I am ashamed to say Derrick that I know very little about the Wars of the Roses (and being from the white rose county I ought to know more). Shall have to read up on it.

Leilani Lee - glad you are able to read me again. Also pleased to hear that you enjoy reading my writing.

Some ruins are more interesting than the original building when it was still in use. Good post! Yes Captain Cook was a great man and, according to the Aborigines, also a man who treated them with respect. Every country he visited he met the people, who lived there, with respect and diplomacy.

I like the Roman soldier story, Weaver! There's another plant that grows on ruins and walls, Cymbelaria muralis - I wonder if there's any story attached to that?

As ever a wee bit of calm in the maelstrom & it's always worth pulling up the chair and looking and reading. A real look inside your locality :)

BTW, re painting walls, Weaver: having a long neck is useful for seeing over walls, but our arms are quite short, so painting them is still hard work!

Am I doing art work? Ah, maybe so in a parallel universe!!

Wonderful snippets of history, - thank you for them Weaver.

So much history. I've never been to Middleham, and I've obviously missed a treat.